Home » Writing » INTERUPTING THE WORLD: ON JODY GRAHAM’S AFTER THE RAIN by Dr Bill Schaffer

INTERUPTING THE WORLD: ON JODY GRAHAM’S AFTER THE RAIN by Dr Bill Schaffer 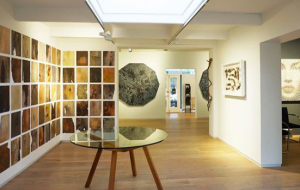 In creating the After the Rain series, Jody Graham literally dragged her materials through mud and rain to produce images that express the transient ‘sheen’ that transfigure a forest immediately after a shower.  The title of the series thus refers equally to theme and process: these works are both ‘about’ the world after rain and ‘of’ that world. I think this uniquely ‘immersive’ approach implies a very specific approach to the very possibilities of painting.

The act of painting always involves the interactions of material elements – pigments, binders, and liquids – but these reactions are timed to allow the artist to exercise creative choice at every moment. Paint flows from the brush on demand, diffuses and settles across surfaces in predictable ways, etc. Traditional painting technique thus implies the domination of passive matter by human will: it is the very performance of that domination.

It is this mastery that Graham’s technique interrupts when she works with her materials physically submerged in rain puddles. The pigments she applies are sullied by dirt and mud and sap, the paint itself diffuses uncontrollably in the medium of water, materials left to sit in water are saturated and eroded in ways that the artist can neither predict not control. In effect, the materials themselves are allowed to take on a degree of agency, as if they had a right to make their own decisions. It is not that the artist has renounced technique – she still controls her own response to each loss of control, still decides when the image is ‘right’ etc.  It is rather that she has chosen to abandon the traditional posture of mastery in order to initiate a kind of dance with her materials, one that unfolds, as it were. on their own level. The artist’s role is to nurture her materials as much as to control them. Puddles formed by the interaction of sky and earth become little wombs in which unexpected forms are allowed to gestate. The artist herself becomes a kind of midwife.

Graham’s mission as an artist has always been to be a friend to broken, decaying, forgotten things. The images presented in this exhibition were composed on abandoned old paintings and discarded scraps of paper using improvised tools fashioned from found bits of twig, plastic, rubber and string. Variously designed for purposes of marking, scratching, gauging, tearing, and piercing, these weird, hybrid painting tools stand as fascinating artworks in themselves, It seems fitting that these twisted and gnarled instruments suggest a witch’s toolbox. Like a witch, Graham makes it her business to forge alliances with natural forces of transformation, growth, and decay. Like a witch, she seeks to amplify and extend her personal power by creating the conditions in which found elements reveal their own concealed powers. One might imagine the artist at work in the forest with her bizarre tools, stirring the contents pf rain puddles as if they were so many cauldrons formed spontaneously in the folds of the earth.

Graham has often formed special alliances with beings she has encountered in the wild. In the past these have included butterflies and bower birds; in this exhibition it is crows.  These crow images prove that the artist is a master of traditional drawing techniques. They are rude, stark, calligraphic, and possessed of an extraordinary kind of synaesthetic power. I have the irresistible feeling that I can somehow see the crow’s unmistakable stabbing call in the very lines that define its body. It is as if each of Graham’s marks rend the surface on which it is drawn in the same way that the bird’s call might rend the sky. Like Graham’s own art, these crows belong to the world by interrupting it.