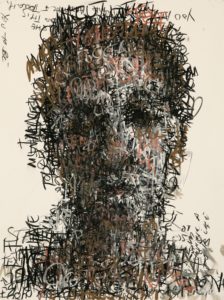 Borderline is essentially a self-portrait which fuses two people, the other being Julian Horne, who I was in a relationship with for seven years. We separated one year before his early passing in October 2016. Julian lived in the mountains most of his life and was often seen riding his bike on the Great Western Highway or walking along Hawkesbury Road at Winmalee. He was known for his astute humour, immersion in Australian Arts and culture, and his love of the Blue Mountains.

This work is also part of a self-portrait challenge from 2016. The task, requiring a self-portrait a day for 45 days, was proposed to me by my artist friend Jane Giblin. We continued participating in this project for over 70 days, posting our portraits daily on Facebook. The added layer of social media helped maintain this long creative journey.

Within two weeks of this project I was tired of looking at my own head. This boredom proved to be brilliant, it forced me to experiment with other ways I could draw myself and to question what I thought a portrait was. I now think a portrait can be more than a face, more than a head, even more than one person. It can be the music, joy or in the case of Borderline, the internal madness, which dominates my thinking.

My state of mind prior to making Borderline was fragile because of the recent relationship break up. It was difficult to look at my sad ageing face in the mirror and find the motivation to keep working. What pushed me to forge ahead, was an awareness this artwork and others similar to it had to be made in this wounded state, not when I had settled down.

There are a few works similar to Borderline; one is part of The Kedumba Collection of Australian Drawings, and a few others have been gifted to good friends. The remaining works from this time are stored away because they are a direct link to that difficult period of my life and to Julian’s passing away.

I am constantly investigating ways to draw, in particular ways to make marks that squash my ego. For example, when I am in the process of drawing I think my self-driven critic can prevent something greater from happening. Essentially, I am trying to get myself out of the way to see what else will develop. When I use handwriting as a way to make marks, my internal critic is often by-passed, and I am more focused on writing the letter or word as opposed to judging its aesthetic quality. Using this technique, I hope to probe my subconscious.

To commence working this way I do not pre-draw a portrait guideline. I simply start transcribing thoughts in my head. For this particular work I went over and over situations and conversations shared with Julian, trying to make sense of crushed beliefs and dreams.

I was uncertain if my concept to create a text-based portrait would work, however it’s that difficult pleasure that comes from trying to figure things out that drives my practice. Sometimes my ideas crash, other times they are average, occasionally they are more than I expected, and when that happens I feel like I am making art.

Using social media to publish a portrait a day was an indirect way I could connect with Julian. Although I had employed the obligatory ‘block-friend’ request, I knew full well he would be keeping an eye on what I was up to, either by checking out my website or accessing my Facebook site through someone else or under an alias name. I was confident that on some internet platform, somehow, he would see the original title of this work ‘Surviving the Narcissist’ and know it was about him. The only way I could make sense of all the lies and hurtful behaviors was to come to believe he was a narcissist. This was my truth then. Julian found a way to contact me, he was annoyed with the title and the popularity this work was receiving. He told me I got the title wrong; it should be Borderline, representative of Borderline Personality Disorder. Julian spent a lot of time trying to get a better understanding of himself, evidently at that time, he thought BPD described his actions best. I don’t know exactly what disorder Julian had, but I do know my actions, especially connected to compulsively working also contributed to the fabric of our breakup. Renaming this work is my way of reconciling Julian’s wishes, my feelings for Julian and my part in all this.  One of the symptoms of BPD can be the failure to maintain healthy relationships, although I am not diagnosed with BPD, I do recognize my inability to maintain a strong bond throughout our relationship. Consequently, I thought Borderline is a fitting title for a work that essentially described both of us at that time.

In addition to using text to help alleviate the madness in my head, it seemed appropriate for this portrait to use letters and words. Julian was what I considered a wordsmith, an avid reader and lover of poetry, and for a time an English teacher. One of my dearest memories was watching him listen to poetry. In those moments I witnessed seeing him in deep communion with the magical relationship words can have when they are poetically linked together. Catching him in this state reminded me of when I have seen people deeply engaged with an artwork, when they are totally absorbed, really looking at and experiencing art entirely. Memories of seeing him in these moments is a treasure I will always carry.

After we separated, Julian wanted to maintain a connection but I needed time before I could consider seeing or talking with him again. We will never have those conversations to heal and move forward now. That opportunity is lost forever. Putting this work back out into the public domain, especially in Portraits 2020 at The Blue Mountains Cultural Centre, a place we visited as a couple, feels right to do so now.