Jody Graham has been selected for the Adelaide Perry Prize for Drawing this year.
Official opening & announcements by acclaimed artist Jenny Sages Friday 1st March 2013, 7pm, Adelaide Perry Gallery.
The prize is valued at $20,000.
Jody’s works will be exhibited along with the work of 41 other finalists at The Adelaide Perry Gallery
Cnr Hennesey & College Sts, Croydon
Exhibition continues 2 March to 5 April 2013
The gallery is opened Monday to Friday: 8.30am-4.00pm and Saturday: 11.00am-4.00pm (closed Easter weekend). 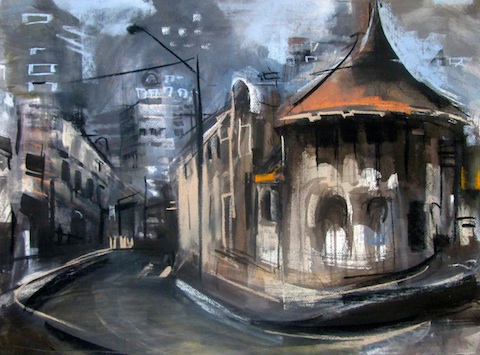 Finalist work will be exhibited in the Foundation Court at NSW Parliament House from 1st – 31st May, and will be open to the public 8.30am-5.00pm Monday to Friday.
NSW Parliament, Macquarie Street Sydney

The former Darlinghurst Police Station is located behind Taylor Square, sitting on the corner of Bourke and Forbes Street. It is an example of Edwardian architecture built in 1899.

I began drawing this building early in 2012 because of the construction work happening behind it. The contrast between a historical building and new construction attracted me. The police station itself reminds me of something out of a eccentric fairy tale. It appears to have resisted change while tucked away behind the hustle and bustle of Oxford Street. This whole site peaks my curiosity both visually and historically. Discreet yet bold, it appears very seductive. I imagine there would be a treasure trove of stories that transpired behind these walls.