An Energising Weekend of Expressive Drawing with Jody Graham

Drawing – an insightful and dynamic endeavour of the mind and body. 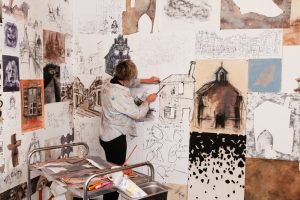 Two days packed with inspiring techniques that will super charge countless possibilities to create interesting and engaging marks that reflect you and communicate your ideas.

Enrol in this intensive boot camp drawing weekend to fire up your drawing skills and develop your personal handling of materials and mark making.

For more information and bookings 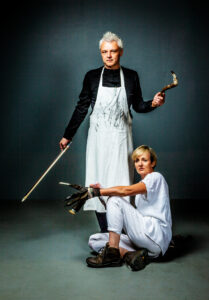 It was late September 2017 when a visual artist encountered an experimental musician at Arthur and Yvonne Boyd’sbequest property, Bundanon, established in bush on the left bank of the Shoalhaven River 15 km inland from Nowra and about 170 km south of Sydney.

Jody Graham and Mark Cauvin first met after Jody heard dark, strange, growling sounds emanating bunyip-like from Mark’s improvising on his double bass in the forest at night. Mark later found himself sitting beside a bizarrely furry drawing tool that Jody had fashioned from the foot of an already dead possum.

Both had been invited to participate in an artists’ residential Siteworks event, ‘Birds and the Bees’. Early in the southern spring. Right. They even got to lodge for a few days in the one house, hive-like, albeit with other artists in residence.

If this is starting to read like the setup in a Carl Hiaasen comic crime novel, you’re not too far from the mark. Except it ain’t Florida and, thankfully, there’s a dearth of murders or negligent deaths. No animals – actual or mythical – were harmed in the making of this art. You can’t hurt dead creatures.

Anyway, to resume with the mating connotations (or at least a middle-aged analogue), the two hit it off. Now when I say this I don’t mean some drunk-students-at-a-house-party-shagging-on-the-stairs kind of hitting it off. No. More a slow dance of intrigue and allure.

So fast-forward almost 18 months (yep, a slow dance) and Jody invited Mark and two other artists who’d participated in the Siteworks event to collaborate in a performance for her exhibition, Pee in a Wetsuit, at the Chrissie Cotter Gallery in Sydney’s inner west in 2019.

Jody wanted artists other than herself to come and play with her drawing tools; and the performance had Mark engaging and providing the aural backdrop for the trio’s mark-making.

From there the idea of the two working on a joint performance was conceived. During the pandemic lockdowns Mark contacted Jody to follow up on the joint project idea. His performance opportunities had been eliminated and he wanted to create new work to fill the void.

The gestation proceeded with fortnightly chats, learning about each other’s creative practice and identifying a shared artistic language; the outcome being their first Sound Drawing performance at BigCi international creative grounds in Bilpin in January 2021.

Jody had invited Mark to join her at a Wildfires residency to use the space for a week’s rehearsal leading to two successful performances before an audience, and working with theatre director Felicity Nicol and a professional crew to produce a performance video.

So, from the artists’ and audience perspectives, what is Sound Drawing?

To this point it’s been a collaboration to create real-time performances of visual sound, presented by the two as installation art accompanied by exhibits of drawings, paintings, and artist tools.

Mark and Jody use both mark-making and sound-making tools, with Mark deploying digital and analogue technology as media to create and record the work and to enhance the perceived connection between the drawing and the sound.

In a spirit of call-and-response, Jody expresses the time, extent, and volume of Mark’s sound in layers with gradients of colour, tone and materials. Thus the storyline and flow of her marks articulate a progression from foreground to background and return, and allows a concertina effect of shifting leads between artist and musician.

This performance in real time moves beyond conventional music graphic notation, where scores are predetermined prior to performance and time/duration has already been prescribed, and becomes the art in itself recorded digitally as well as drawn on paper.

Jody and Mark have over the last 18 months been consistently rehearsing and working on new ideas and concepts connected to sound, drawing, and performance through improvisation and experimentation. Their objectives are to inspire audiences with new sounds and visual representations, most recently at the Soundout Festival in Canberra’s Drill Hall Gallery in June 2022, and to create audio-visual installations for exhibitions.

If all this sounds a bit wanky, that’s a real risk. And so it is to the two performers’ artistic credit that there is genuine substance to their collaboration.

This is not to say that the resulting visual output is ‘hang-on-the-wall’ saleable. I suspect most will remain rolled-up in the artist’s studio. But the audio-visual recording of performances is quite another thing and, more than that, the audience experience of the live performance is something else again. You really do gotta be there.*

They are also looking to push the pairing of drawing and sound with technology that will enable Jody to control sound recording parameters using sensors that Mark attaches to her drawing hands (or any other part of her). And Mark is working on sound feedback loops by which Jody, through microphones attached to her and to surfaces she draws on, can listen to the sounds she makes as she draws, while Mark will have the ability to mix these sounds in real time and perform with them through loudspeakers.

So, who knows what will blossom next. Characters in a new Carl Hiaasen novel, perhaps?

* For the writer, Rick O’Brien, modernist art reached its apogee with Paul Cezanne around 1902, and his taste in improvisational music favours Miles Davis and John Coltrane circa 1959. So, while he owns a few of Jody Graham’s (more conventional) pieces, he approached the assignment at the Drill Hall in Canberra with a degree of trepidation, anticipating frenetic daubs accompanied by ‘strangled cat’ music.

To his relief the experience was enjoyable, amusing, even fun – with the audience of forty or so people showing genuine and prolonged appreciation. (NB No manually asphyxiated felines were encountered.)

CLIMARTE introduces the world’s first gallery dedicated to addressing the Climate Emergency in all its manifestations.
FIRE FORUM creates the opportunity to come together and talk about changes in climate due to global warming.
For more information and to attend FIRE FORUM
rsvp gallery@climarte.org
To read more 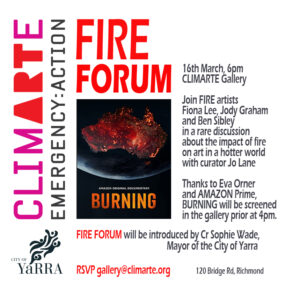 JODY GRAHAM HAS BEEN AWARDED THE 2022 PERRY PRIZE FOR HER DRAWING ‘CINDER DANCE’.

PLC Sydney is excited to announce that Sydney artist Jody Graham has been awarded the $25,000 acquisitive Adelaide Perry Prize for Drawing 2022, for her drawing ‘Cinder Dance’.

The Perry Prize Exhibition of Finalists was officially opened on Friday 25 February at Adelaide Perry Gallery. Special guest speaker, and this year’s judge, Dr Andrew Frost, writer, critic, curator and documentary makerspoke of the high standard of works received. From over 400 entries, Andrew’s shortlist comprised of 46 works. From it, Dr Frost highly commended the entries of Margaret McKenna, Luanne Mitchelmore and Nadia Odlum, before announcing Jody Graham’s work as recipient of the 2022 award. 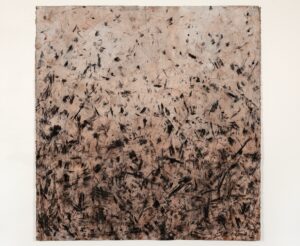 In a statement about ‘Cinder Dance’ Jody said, ‘While researching the Black Summer Fires I was impacted by stories from people who were affected. During this time I connected with Den Barber who runs Yarrabin Cultural Connections (YCC). Den is an Aboriginal Man, descendant of the Traditional Custodians from Mudgee of the Wiradjuri people in the central tablelands of New South Wales. What I discovered from Den helped me understand more about cultural burning and how it is all about caring for the environment. When I made ‘Cinder Dance’, I invited nature to participate in the process and submerged the drawing into a dam. I then used rocks and tree sap to mark and colour the drawing and hit and swung large charcoal branches at the drawing

Click here to watch the Opening and Announcement of the 2022 Perry Prize Winner.

The Perry Prize Exhibition of Finalists continues until 25 March at Adelaide Perry Gallery, corner of Hennessy and College Streets, Croydon.

Convinced of the creative power of the arts to inform, engage, and inspire, the CLIMARTE Gallery presents groundbreaking participatory exhibitions addressing interconnected and interdependent ecological impacts as well as effective, justice-based solutions to the Climate Emergency.2021 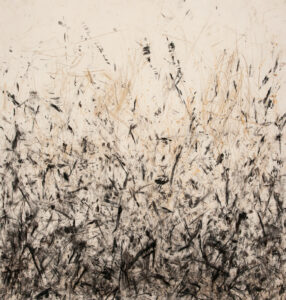 For more information and to view artworks click here

Neutral is not enough.

Going carbon neutral won’t save our planet. Taking away the Emissions Allowances big polluters need to pollute, might. 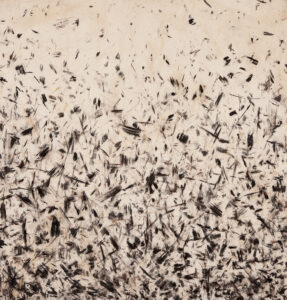 The first iteration of C2Zero Art features a community of international artists whose practice is concerned with the natural environment and risks posed by human activity. Each artist has purchased carbon credits to more than offset the carbon generated in the making of the featured work.

CLIMARTE is proud to start 2022 with FIRE, an exhibition by artists who have experienced or make work about fire.

Fire, particularly in some counties and very much in Australia, is a huge consequence of the change in climate with global warming. The artists in FIRE have experienced first hand the ravaging effects of fire.

FIRE will be opened by both Dan Condon, a fire-fighter who ran in the Run for a Safe Climate in 2009, and the Mayor of City or Yarra, Cr Sophie Wade on the 9th of February at 6pm.

FIRE is made possible thanks to an Annual Grant from the City of Yarra.
FIRE is now a Sustainable Living Festival Event also >

For more information about CLIMARTE gallery and FIRE click here 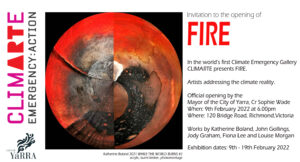